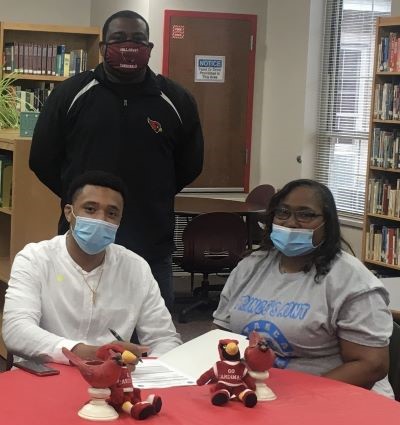 Dollarway senior Prince Okojie signed his National Letter of Intent earlier this month to play collegiate football next season. He will be traveling to Grand Rapids Minnesota to play for Itasca Community College in the fall.

Okojie did most of his damage on the defensive side of the ball this past season, amassing 112 total tackles, 13 tackles for loss, 2 sacks, 6 quarterback hurries, 4 passes defended, 2 Int’s, and 4 forced fumbles. The 6’4 220 pound athlete also had a blocked punt and averaged 33.3 yards per kickoff return and was named to the 2020-2021 All State football team.

Okojie became the third Cardinal to sign a National Letter of Intent as he joins teammates Lamarious Douglas and Cameron Henderson, who signed their letters with Oklahoma Pan Handle State earlier this year.