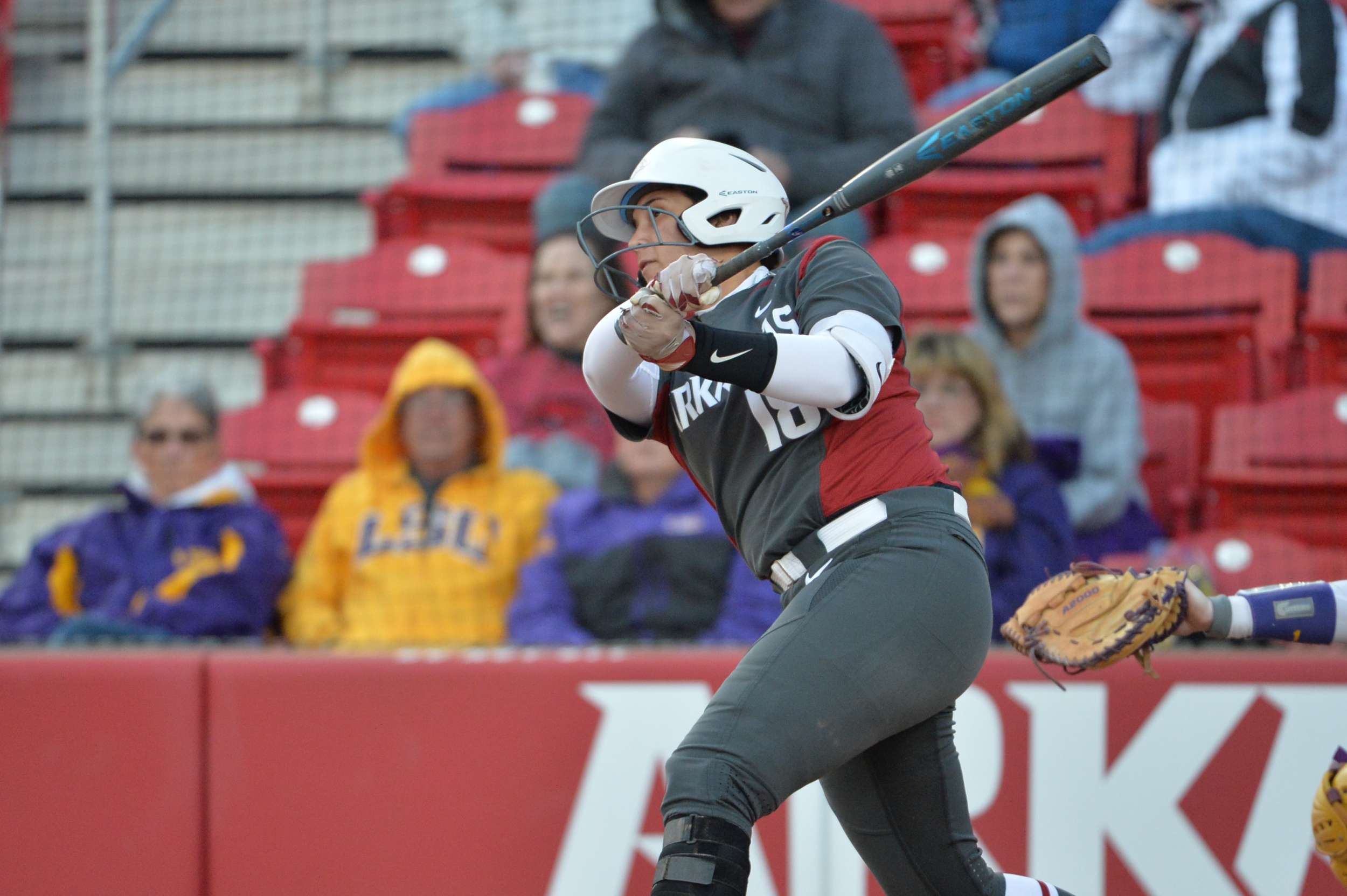 FAYETTEVILLE – Senior Ashley Diaz left no record untouched tonight (April 18) in the Razorback’s 8-5 series-opening win over No.9 LSU. Diaz’ went 1-for-3 at the plate, but made her at-bats count. She recorded her 200th career hit on a first-inning home run, her program-best 10th career sacrifice fly in the fourth and recorded four RBI to make her second all-time at Arkansas for career RBI.

Starter Autumn Storms opened up the contest with a scoreless showing in the first, shutting down LSU’s top batters in the order. Arkansas fired up the bats in the bottom of the inning, as sophomores Hannah McEwen and Danielle Gibson went back-to-back with base hits against the Tiger starter, Shelby Wickersham.

Diaz followed with her big hit, soaring the 1-2 count out over the left-center wall, giving the Razorbacks a 3-0 lead.

LSU (36-10, 13-6) quickly responded with five unanswered runs in the second and third innings. The Tigers capitalized on a home run by Shemiah Sanchez and a Razorback wild pitch to score two in the second, and three in the third with runs batted in by Sanchez, Amanda Doyle and Michaela Schlattman.

Sophomore Mary Haff entered for Arkansas in the third inning and pitched 4.2 scoreless innings for the Razorbacks. Haff recorded the victory, her 16th of the season. Haff gave up only four hits to the league’s leading offense, walking one Tiger and striking out three. Haff faced 20 batters and recorded eight at-bats with at least two strikes.

Now trailing 5-3, the Hogs took advantage of a Tiger error in the fourth to cut LSU’s lead to 4-3. It would be sophomore Nicole Duncan who scored on the play, as Gibson’s ball came off the second baseman’s glove and trailed off into right field. Diaz scored McEwen from third on a first-pitch sacrifice fly and Arkansas and LSU were tied at 5-5 through four frames.

Sophomore Linnie Malkin and senior Katie Warrick got in on the fun as well, as Malkin hit the game-winning home run in the fifth inning and Warrick followed with a solo home run to left center in the sixth.

The win over the Tigers is monumental for the Razorbacks, as they defeated LSU for the first time under head coach Courtney Deifel.

Keep Up with the Hogs

The Hogs and Tigers will play Friday at 6 p.m. (CT) and on Saturday for the series finale at 1 p.m. (CT). Arkansas has only three conference series remaining, with a road series to follow next weekend (April 27-29) at Texas A&M and the final home series of the season against Auburn (May 3-5).