Despite Rumors, Beyoncé And Jay-Z Did Not Show Picture Of Their Twins Rumi And Sir During ‘On The Run II’ Tour

Fri, June 8 by Staff
Facebook Twitter LinkedIn Pinterest E-Mail
HomeMusicUrbanDespite Rumors, Beyoncé And Jay-Z Did Not Show Picture Of Their Twins Rumi And Sir During ‘On The Run II’ Tour

Beyonce and Jay Z sent fans into a spin by posing with two babies in photos projected onto the screen on the first night of their On The Run II Tour in the UK on Wednesday. The crowd – and fans on Twitter – went into a frenzy after they shared what appeared to be a series of family snaps on stage at Cardiff’s Principality Stadium in Wales. But it turns out the babies in the now viral images were NOT their own twins Sir and Rumi.  Elsewhere during the concert, the couple shared home video footage with fans, leaving many perplexed about their decision to pose with two kids who aren’t their own. The twins, who will turn one on June 13, have rarely been seen in public and the couple has only shared one image of them before. 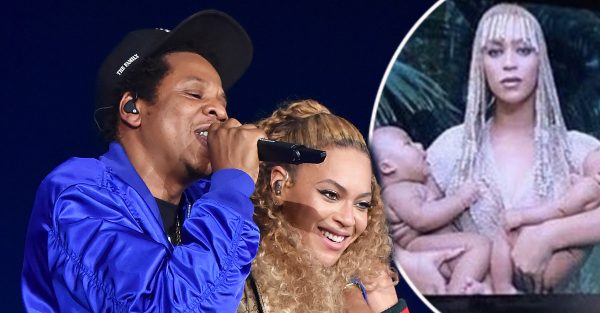 FANS went wild when they thought Beyonce and JAY-Z unveiled new pictures of their twins.

Kodak Black claps back at rumors he’s a clone, “You can’t duplicate this”