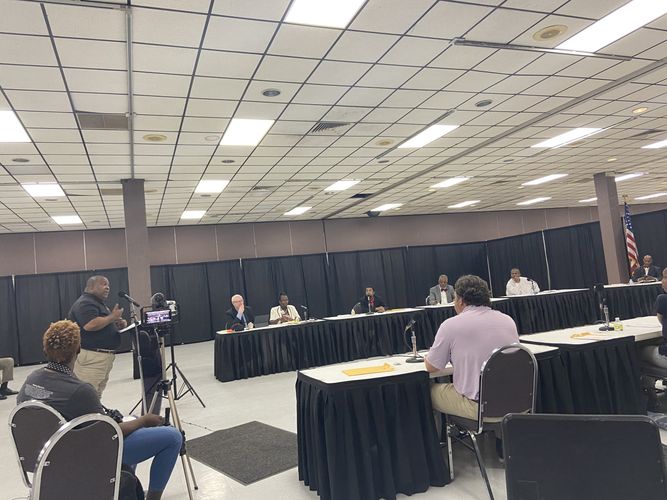 The Pine Bluff City Council held its last meeting of the month addressing several items on its agenda two ordinances and five resolutions.

All eight of the council were present with Mayor Shirley Washington who introduced public comments to begin the meeting.

One of those public comments supported the seventh item on the agenda. Dr. Shedrick Rice endorsed and wrote the grant proposal that supports hiring STEM and special education teachers in Southeast Arkansas.

The council approved that resolution without contest.

During the committee reports, Ways and Means proposed three budget adjustments that were approved unanimously. Also approved five to three to move forward to the full council was the proposal to hire an auditor for the Parks and Recreations Department. Alderman Ivan Whitfield endorsed that proposal.

Up for its second reading for the proposed ordinance on the agenda to amend the gross receipts tax on hotels and restaurants to address short-term rentals, food trucks, and related purposes. The council approved the ordinance to be read for a final time in their first meeting of September.

The second ordinance was to enact a new section of Article V in chapter 19 of the code of ordinances respecting lateral transfers of law enforcement officers which allows eligible police officers to return back to the Pine Bluff Police Department for employment.  The ordinance was read three times due to being declared an emergency and the council approved the section without contest.

Council member Brown Jr. spoke to Deltaplex after the meeting and further explained what this means for the PBPD.

Included in resolutions, the board also approved declaring certain houses, buildings, and or structures as nuisances and require abatement. Council member Lockett explained that property owners do have the option to develop property on a 90-day basis.

The resolution renamed a portion of U.S. Highway 63 Saracen Resort Drive and the council all approved this change unanimously. Council member Lockett also spoke to Deltaplex after the meeting and further explained why the renaming took place.

The council also approved the appointment of Teki K. Hunt to the board of trustees of the Arts and Science Center for Southeast Arkansas. The final resolution proposed was the adjustment of the annual salary of the deputy city clerk was approved five to three with Brown Jr., Holcomb, and Shaner in opposition.