The two schools — Southwest Preparatory High and Pine Bluff Lighthouse Charter Elementary — are two of the three open-enrollment charter schools that received F letter grades from the state after the 2019 spring ACT Aspire exams given in grades three through 10. The letter grades are based on the exam results, achievement gains on the exams over time, and additional factors such as student attendance.

Capital City Lighthouse Charter School in North Little Rock also received an F grade from the state, and the charter panel is holding out the possibility of conducting a hearing on that school in early 2020.

The authorizing panel decided to add the two hearings to its Dec. 18 meeting after Tracy Webb, Division of Elementary and Secondary Education’s charter school program manager, gave an annual report on performance in the state’s 25 open-enrollment charter school systems that encompass 42 schools. 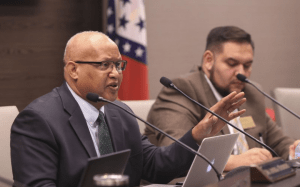 Twelve of the schools received A grades, Webb said. Three schools improved a letter grade over the previous year, seven declined a letter grade and 32 had grades this year that are unchanged from the 2018 grading period.

A December hearing for Pine Bluff Lighthouse Elementary will be the second for the school in as many years before the seven-member panel, which is made up of state employees and other interested residents.

The kindergarten-through-sixth-grade school has received an F grade for two consecutive years. The panel in December 2018 voted 3-2 against renewing the school’s state charter beyond the 2018-19 school year because of insignificant or erratic achievement over the school’s then seven-year history.

However, the Arkansas Board of Education held its own hearing on the school and voted to allow it to retain its charter and continue to operate in this 2019-20 school year.

The state Education Board has the legal authority to either accept the panel’s decision to close a charter school or conduct its own hearing — either at its own initiative or the request of school operators — before making a final decision on the fate of a charter school.

Open-enrollment charter schools are operated by nonprofit organizations other than a traditional school district. The charter schools are entitled to waivers of some state laws and rules, but as a result they are also supposed to be held to a higher level of accountability for student achievement.

Webb reported that nearly 62% of the Pine Bluff Lighthouse Elementary pupils are in need of support in terms of reading instruction.

Combined, Pine Bluff Lighthouse elementary and middle school — which received a D grade for its seventh- and eighth-grade students — serve about 250 students this school year.

Members of the authorizing panel were most alarmed Tuesday about the status of Southeast Preparatory High Charter School, which opened in the 2018-19 school year.

Almost 66% of the students at the F-graded school need support in reading, Webb said, adding that the school also has financial issues with “extremely low bank balances, negative end-of-year projections and child nutrition claims not being submitted.”