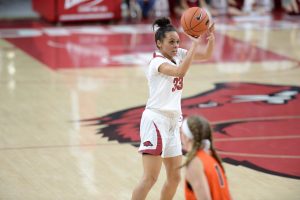 AMES, Iowa – Chelsea Dungee scored 19 points in the third quarter, but the University of Arkansas women’s basketball team suffered a 91-82 loss at No. 22/23 Iowa State in the Big 12/SEC Challenge in Ames, Iowa, Sunday afternoon.

Dungee had a career-best 27 points leading four players in double figures but the inside play of Iowa State (6-1) was something Arkansas (5-3) could not overcome. The Cyclones outscored Arkansas 44-20 in the paint and had an 18-14 advantage in second chance points. ISU outrebounded Arkansas 47-37 and had seven blocks while holding the Razorbacks without a fast-break point.

Dungee, Monk and Mason all had career scoring nights with Dungee adding a 13-for-16 performance from the line. Monk finished with a season-best 21 point and Arkansas got 10 points each from Mason and Alexis Tolefree.

ISU led by as many as 14 points late in the game but Arkansas mounted a comeback in the first five minutes of the last frame with a 12-9 advantage cutting the lead to single digits.

Arkansas cut the lead to three points, 85-82, at the 3:02 mark but a kick-out 3-pointer by Iowa State changed the momentum as the Cyclones outscored the Razorbacks 6-0 in the final minutes of play.

The Razorbacks and Cyclones combined for a 70-point third quarter with ISU outscoring Arkansas 39-31 in the frame.

The First Half
Arkansas found success early at the free throw line and did a good job defensively against the Cyclones in the first half. The Razorbacks spotted ISU an 8-2 lead from the opening tip but trailed by just three points, 18-15, at the end of the first frame.

Kiara Williams forced a couple of ISU turnovers that led to Razorback points as Monk and Dungee began making their shots.

The defense remained strong in the second quarter as Arkansas held Iowa State without a basket for more than three minutes in the period. The Razorbacks were 5-for-7 during that stretch, tying the game for the first time on a jumper from Jailyn Mason at the 6:05 mark before the half.

The teams traded points until ISU put together an 8-0 late in the half talking the lead into the locker room at the break.

Notes
•Arkansas Starters: Malica Monk, Kiara Williams, Jailyn Mason, Bailey Zimmerman, Chelsea Dungee
•Arkansas is 1-2 against Iowa State.
•Arkansas is 2-3 in the conference challenge.
•It is the fifth time in eight games the Razorbacks have made double digit shots from the free throw line. They finished going 19-for-25 from the line.
•Chelsea Dungee scored a career-best 27 points. She has scored in double figures in every game this year and scored 20+ points in four games. Dungee was also a career-best 13-for-16 from the line.
•Malica Monk posted a season-best 22 points. Monk has scored in double figures in seven of eight games. She has 964 career points.