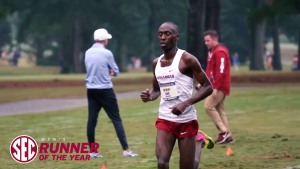 BIRMINGHAM, Ala. – In recognition of his SEC Championship run, helping Arkansas to a runner-up finish at the conference meet in Auburn, Ala., Gilbert Boit received Southeastern Conference honors, announced Wednesday afternoon.

Boit was named the SEC Men’s Runner of the Year, voted to that distinction by the conference head coaches. Currently, in his first cross country season with the Hogs, Boit has finished as the No. 1 at two meets this season (SEC Championships, Penn State National Open) and has posted a season-best time of 22:20.13 that is No. 1 in the SEC this season at 8K. Boit became the fifth Razorback over the last eight seasons to bring home the individual conference title joining Eric Fernandez (2011), Kemoy Campbell (2013), Stanley Kebenei (2014), and most recently Alex George (2016).

The junior from Eten, Kenya was also named SEC Runner of the Week following his Razorback cross country debut in a second-place finish at the 30th Annual Chile Pepper Festival.

12 year old arrested with gun. Intent was to “shoot up” Jack Robey