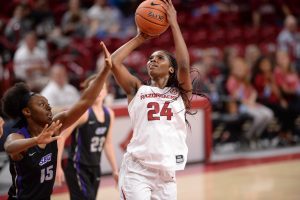 FAYETTEVILLE, Ark. – The University of Arkansas battled through a slow start using rebounds and made free throws to get a 71-44 win over Prairie View A&M in Bud Walton Arena on Sunday.

Arkansas, 8-3, tallied 64 rebounds, the most ever under head coach Mike Neighbors, and made 18 free throws against the Panthers (3-5). Sophomore Taylah Thomas was the only player in double figures with 11 points. Senior Bailey Zimmerman tied her career-best with 11 rebounds and junior Kiara Williams added 10 boards for the Razorbacks.

The Panthers controlled the tempo of the game in the first quarter and raced out to an 18-13 lead in the first 10 minutes. They outrebounded Arkansas 19-11 to open the game.

Neither team was connecting offensively in the second quarter as they went a combined 0-for-20 until the media timeout. Arkansas started to find the basket and finished the quarter with a 13-4 advantage and a 26-22 lead at the half.

The Razorbacks held the Panthers to single digits for the second consecutive frame, 21-9, in the third quarter and went on to dominate the second half.

Senior Malica Monk and Zimmerman both graduated on Saturday and will wear the SEC Graduate Patch on their uniforms this spring. Monk finished with eight points and needs just eight more to reach 1,000 points for her career.

Notes
•Arkansas Starters: Alexis Tolefree, Malica Monk, Kiara Williams, Jailyn Mason, Chelsea Dungee
•Bailey Zimmerman had nine rebounds in the first half and finished with 11 for the game.
•Both teams had just two field goals in the second period, but Arkansas went 9-12 from the line to take the lead at halftime.
•Arkansas held PVAMU to just four second quarter points and nine points in the third quarter.
•Kiara Williams grabbed double figure rebounds for the fourth time this year and the 11th time for her career. She finished with 10 boards.
•Arkansas had a season high 64 rebounds – the most ever under head coach Mike Neighbors.

Up Next
Arkansas is in the midst of stretch that includes three games in five days. The Razorbacks return to the court Tuesday hosting Nebraska at 7 p.m. and follow up with a road game at Tulsa on Thursday.