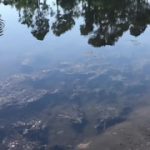 Blue-green algae that may have caused these dog deaths isn’t in Arkansas, but people should be cautious because it has been in the past.

The Army Corps of Engineers in Little Rock said it’s not in Arkansas, but it was found in Lake Gillham last year, as well as Lake Nimrod in 2014.

Because the algae are so dangerous the best option is prevention, which means not letting your pets near any standing water.

There’s no known antidote to the toxins, so typically the only chance you have is to get to a vet who can flush the toxins quickly, usually by induced vomiting. But chances with that are still slim. “Regardless of species, the toxins enter the system so quickly that the animal is usually sick before reaching medical care,” VCA Hospitals says. “It is often too late to remove the toxin.”

The Army Corps of Engineers said if you notice any standing water that looks very green and has a strong smell it should be reported.