Balanced Attack On The Road

Balanced Attack On The Road 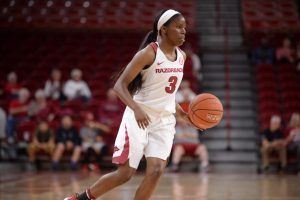 ABILENE, Texas – A dominating fourth quarter capped off a balanced offensive attack as the University of Arkansas women’s basketball team played to an 80-68 win at Abilene Christian University on Saturday.

Arkansas (7-3) and ACU (7-2) were separated by just three points, with the Razorbacks up, 57-55, at the end of three periods. An 11-0 run to start the final frame led to a 23-13 advantage for the Razorbacks as they picked up their second true road victory of the season.

Junior Alexis Tolefree led four players in double figure scoring. The Malvern, Arkansas, native dropped in 21 points, her seventh game in double figures and the second with more than 20 points. Malica Monk added 18 points and four assists in 26 minutes followed by 12 points each from post players Kiara Williams and Taylah Thomas. Williams paced Arkansas with11 rebounds for her first double-double of the year.

Arkansas trailed after the first quarter, but the long-distance shots started to fall in the second 10-minute period. Tolefree hit three from behind the line and Monk had two while Bailey Zimmerman added one 3-point make. The six 3-pointers were nearly double the 3.6 3-point field goals allowed that the Wildcats averaged coming into the game.

The Razorbacks added four more 3-pointers in the second half giving them 10 for the game. It is the third time this season Arkansas has had double-figure 3-pointers.

Down two after the first quarter, Arkansas put together a 7-0 run to open the next frame to open a 6-point lead. ACU stormed back and the back-and-forth battle continued. The Wildcats tied the game at 37-all with just over two minutes to go in the half, but Arkansas was able to take a three-point, 42-39 lead, into the break.

Monk had 10 first-half points with nine points each from Tolefree and Williams. Williams also had eight rebounds in the first 20 minutes.

The Wildcats rebounding allowed them to win the third quarter. A big second-chance 3-point basket at the buzzer seemed to shift the momentum back to the home team. Thomas, A’Tyanna Gaulden, Zimmerman, Tolefree and Jailyn Mason started the final frame with Thomas connecting first to jump start the final frame run.

The game featured six ties and eight lead changes with the Razorbacks leading for the last two quarters. Arkansas committed just eight turnovers, single digit miscues for the third time this year and for the second consecutive game. They had double digit steals for the seventh time this year with 13 take-aways.

Notes
•Arkansas starters: Alexis Tolefree, Malica Monk, Kiara Williams, Jailyn Mason, Chelsea Dungee
•Malica Monk had 10 points in the first half. It is her eighth game of the year in double figures.
•ACU allows just 3.6 made 3-pointers per game. Arkansas had six makes from distance in the first half and 10 for the game.
•Arkansas recorded double figure 3-point field goals for the third time this season.
•Alexis Tolefree was in double figures for the seventh time in 10 games. It is her second game with 20+ points.
•Kiara Williams had her first double-double of the season and the fifth of her career. It is just the second double-double of the season for the Razorbacks.
•Arkansas’ 28 second quarter points tie for the most points in that quarter this season.
•Taylah Thomas was in double figures for the second time this season.
•Arkansas committed single-digit turnovers (8) for the fourth time this year and for the third consecutive game.

Up Next
Arkansas returns to Fayetteville for finals and December graduation next week. The Razorbacks host Prairie View A&M Dec. 16 and Nebraska Dec. 18. Arkansas travels to Tulsa Dec. 20 in the final game before the holiday break.