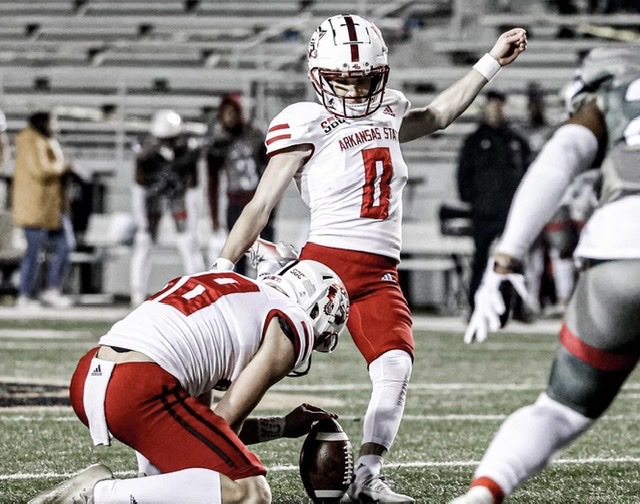 Arkansas State junior kicker Blake Grupe was named the Sun Belt Conference Special Teams Player of the Week on Monday after breaking the school record for career field goals made on a game-winning 42-yard field goal with 1:17 remaining during the Red Wolves’ 27-24 victory at ULM.

Earning the honor for the fourth time of his career, Grupe made both of his field goal attempts and was a perfect 3-of-3 on his extra point attempts, finishing the contest with nine points.  He increased his career field goals made to 59 as he passed Josh Arauco (2006-09) for the school record.

Grupe’s first field goal of the day was from 30 yards out and gave the Red Wolves a 10-0 lead early in the second quarter.  During the game, Grupe also broke the school record for extra points made, increasing his total to 159 to move past Brian Davis (2010-13).

The Sedalia, Mo., native also took over second place in the Sun Belt Conference record books for career field goals and extra points made.  Grupe increased his career points total to 336, leaving him just six shy of the school record that is currently held by former running back Richie Woit (1950-53).

Grupe has now made 15-of-18 field goal attempts this season for an .833 percentage that ranks tied for the 23rd best in the nation.  His 1.5 field goals made per game is tied for the 19th highest average in the country.  With 73 points scored this year, he is averaging 7.3 points per game that stands tied for 43rd among all FBS kickers.

A 2019 First Team All-Sun Belt Conference selection, Grupe is the third Arkansas State player this season to earn one of the league’s weekly awards.  Senior running back Alan Lamar has also been tabbed a two-time Sun Belt Special Teams Player of the week, while second-year freshman wide receiver Corey Rucker was named the conference’s Offensive Player of the Week on Sept. 6.

The Red Wolves remain on the road this week, traveling to Atlanta for a 1:00 p.m. (CT) game at Georgia State on Saturday, Nov. 20.  The game will appear on ESPN3.