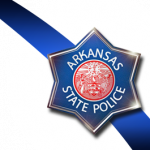 The Arkansas State Police is a division of the Arkansas Department of Public Safety.

Captain Aaron currently serves as commander of Highway Patrol Division, Troop H, headquartered at Fort Smith.  He is a twenty-one year veteran of the state police.

In other business before the commission today, Special Agent, Corporal Phillip Pierce, 50, of Franklin County, was promoted to the rank of sergeant.

Sergeant Pierce, a twenty-five year veteran of the state police, is assigned to the Criminal Investigation Division and will assume supervisory duties within CID Company D (south).