Arkansas Outslugs ORU To Win Third In A Row

Arkansas Outslugs ORU To Win Third In A Row 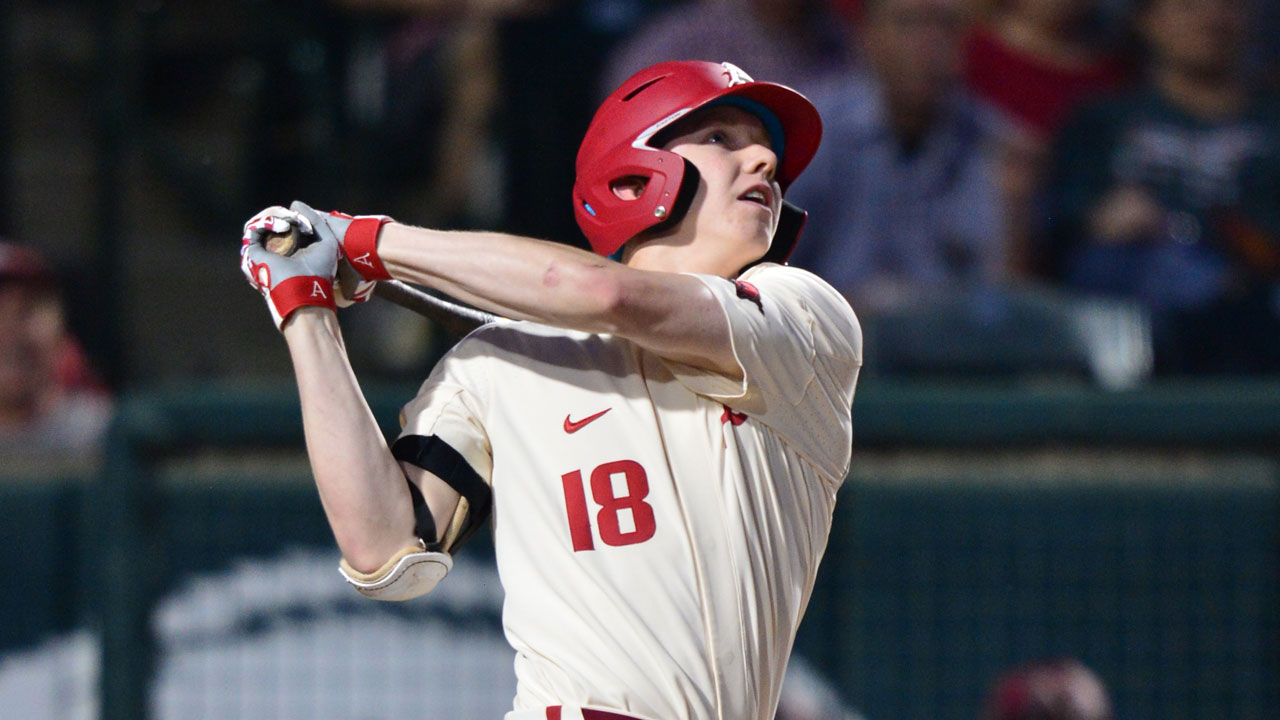 FAYETTEVILLE, Ark. – With the help of a two-home run night by Heston Kjerstad, a four-hit game from Casey Martin and a four-RBI performance by Matt Goodheart, the eighth-ranked Razorback baseball team outslugged Oral Roberts Tuesday night, winning 15-8 at Baum-Walker Stadium for its third win in a row.

Arkansas (25-8, 8-4 SEC) scored four runs in each of the fourth, fifth and eighth innings, en route to matching its season high for runs scored in a game (Stony Brook – March 2; Eastern Illinois – Feb. 16). The Hogs also knocked around 14 hits, which ties for the fourth most this year and was their 17th game with 10 or more.

The win was also the Razorbacks’ 10th-straight over the Golden Eagles dating back to 2009. Only six of those wins have occurred in the regular season as four of the last five have been played in the postseason.

Kjerstad went 2-for-5 with two home runs as he was one of four different Razorbacks to tally two hits or more in the game. Kjerstad’s first home run of the night was a grand slam in the fourth inning, giving Arkansas its first lead of the night. He went deep again in the eighth inning, a solo shot, after Arkansas had put the game away, giving him nine for the year, which ties for third in the SEC.

Goodheart went 2-for-4 with four RBIs and hit his first home run of his Division I career in the eighth inning. The homer was the second of the inning by the Razorbacks and the third inning where they scored four runs. Goodheart has five multi-hit performances in his last eight games and has only gone hitless three times since conference play started on March 15.

Martin came away with the top hitting line of the night, going 4-for-5, a career-high, with two doubles. He only drove in one run on a single in the fifth inning, part of Arkansas’ second four-run frame of the night, but his two doubles give him 14 for the year, just three behind teammate and SEC leader Dominic Fletcher.

Bottom of Lineup Starts Big Fifth
With ORU leading 6-5 going to the bottom of the fifth inning, Arkansas’ Jordan McFarland and Zack Plunkett got a rally started with lead-off walks. After the Golden Eagles made their fourth pitching change of the game, freshman Curtis Washington, Jr. doubled home McFarland to tie the game at 6-6. Then a wild pitch scored pinch runner Casey Opitz to give Arkansas the lead, which was followed by an RBI double by Trevor Ezell to score Washington. The 6-9 batters in Arkansas’ lineup tallied four hits in Tuesday’s win with eight walks and five runs scored.

Kjerstad Stays Hot; Homers Twice
For the first time this season and the third time in his career, Heston Kjerstad homered twice in a game after hitting a grand slam in the fifth inning and a solo home run in the eighth inning. The grand slam was Kjerstad’s first of his career and second by a Razorback this season (Christian Franklin at No. 9 Texas – March 19). Kjerstad has hit four home runs in his last four games and is hitting .312 for the year.

Razorback Quotables
“He’s swinging the bat good. It was good to see him drive that the ball the other way, center, left-center a little bit. I feel when he’s swinging it good that’s where he hits the ball a little bit. That ball had backspin and just carried out of the park and the ball he hit off the scoreboard, that had backspin as well. He kept his hands inside the ball. It was a little inside and it was one of those balls that the way the ball was carrying tonight we knew it was going to leave the yard. He had a good night obviously.” – Head coach Dave Van Horn on Heston Kjerstad’s two-home run night

“I thought his approach was really good tonight. He took a walk or two and then hit that ball. I think his first hit was a double to right-center. He stayed on that ball and we hadn’t seen that in a while. We talked to him about that a lot. The first pitcher they threw didn’t throw very hard, so our approach was try to stay through the middle and go the other way.  And Martin was one we really talked to about it and he did a nice job. It kind of carried over. He took more pitches tonight than I had seen him take in a while. Instead of just swinging, he took it.” – On what he saw from Casey Martin tonight

“I’m trying to let the ball get deep. They started a lefty, so I told myself if they throw it inside just let it go and they’ll probably work me outside and they did. I was just trying to carry the approach that me and Coach (Nate) Thompson have been talking about for a while and just hit the opposite gap. That goes right into me being patient and letting the ball get deep and I can see it longer. I think that really helped tonight.” – Casey Martin on his approach in the game

Up Next
Arkansas goes back on the road for the weekend as it travels to sixth-ranked Vanderbilt in Nashville, Tennessee. The Commodores will be the Razorbacks’ fourth ranked opponent of the year and third on the road. The series begins on Friday at 7 p.m. and runs through Sunday.

NBA Finals: Lakers one win away from title after Game 4 victory