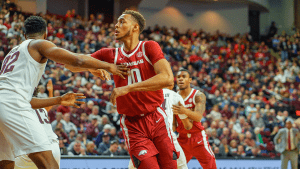 COLLEGE STATION, Texas – With the game tied 59-59 and 4:28 left in the game, Mason Jones drained back-to-back 3-pointers to spark an 8-0 run and Arkansas held on down the stretch to open the SEC slate with a 73-71 win at Texas A&M Saturday evening at Reed Arena.

The game featured 11 ties and 16 lead changes. However, after that 8-0 run Jones started with 4:28 left, Arkansas never relinquished the lead. Even though Arkansas struggled at the line inside the final minute, Desi Sills and Isaiah Joe did just enough at the charity stripe to help secure the win.

Arkansas (10-3, 1-0 SEC) had opened the second half making just 1-of-14 from 3-point range before Jones and Isaiah Joe made four straight, three by Jones and one by Joe. Jones finished with nine points. Jalen Harris scored a team-high and career-high 15 points while handing out nine assists with zero turnovers. Daniel Gafford, who battled foul trouble, finished with his league-best seventh double-double of the season with 11 points and 11 rebounds. Joe added 11 points as well.

Sills led Arkansas to a 32-31 halftime lead as he scored 13 points off the bench. Specifically, he scored eight straight points on a pair of 3-pointers and a layup midway through the first half. He finished with wit a career-high 14.

Texas A&M entered the game as one of the league’s top rebounding teams, but Arkansas wound up out-rebounding the Aggies, 47-42, as the Razorbacks pulled down a season-high 17 on the offensive end. In addition to Gafford’s 11 boards, Gabe Osabuohien had a career-high seven rebounds off the bench.

Arkansas will return home to face Florida on Wednesday (Jan. 9) in the Razorbacks’ SEC home opener. Tip-off is set for 7:30 pm and the game will be telecast on the SEC Network.

Harris to Gafford for the Flush

SECOND HALF: Arkansas gets 10 points and five assists from Jalen Harris in the second half.