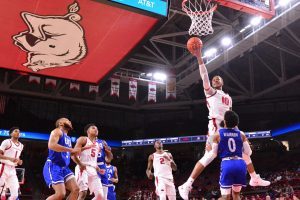 FAYETTEVILLE – Daniel Gafford made a career-high nine free throws and tied a career-high with 10 attempts, scoring 21 points in 22 minutes, to lead Arkansas to a 78-60 victory over UT Arlington Friday night at Bud Walton Arena.

The Razorbacks have won four straight were the only team in the Hardwood Classic to go 4-0.

Jalen Harris scored 14, making 8-of-11 from the free throw line, as the Razorbacks were 34-of-46 from the charity stripe for the game. The last time Arkansas attempted at least 40 free throws was going 27-of-40 from the line versus Sam Houston in the 2016-17 season.

The Razorbacks’ success from the line off-set a poor performance from the field. Arkansas only made 38.2 percent of its shots (21-of-55) while going just 2-for-16 from 3-point range. Arkansas also used a strong defensive effort to secure the win, holding the Mavericks to just 32.7 percent shooting from the field. UTA also committed 19 turnovers with just seven assists.

Gafford picked up his fourth foul midway through the second half an did not play the final 9:26 of the contest. Reggie Chaney helped pick up the slack with eight points and eight rebounds in 18 minutes. Adrio Bailey, who had three steals and two blocked shots, added 14 points and Isaiah Joe had 10.

Arkansas will complete its five-game homestand on Saturday (Dec. 1) versus FIU.

SECOND HALF: Arkansas forced 11 turnovers and UTA only had one assist.