The U.S. Marshals have elevated the fugitive status of an Arkansas man who allegedly murdered his girlfriend and her 4-year-old son last year.

Jory John Worthen, 24, is now a Marshals’ 15 Most Wanted fugitive, and authorities are asking the public for information that could lead to his arrest.

On June 23, 2019, Worthen allegedly murdered 20-year-old Alyssa Cannon and her 4-year-old son, Braydon Ponder, in their home on Ronald Drive in Camden. Police say Worthen was living at the home at the time of the murders. Their bodies were found two days later.

Authorities found Worthen’s truck at the home, but the victim’s white 2007 Honda Accord was missing. That vehicle was later found on July 22, 2019, in a Seattle, Washington Burger King parking lot.

The Camden Police Department charged Worthen with two counts of capital murder, and the U.S. Marshals got a federal warrant for Worthen in February.

The only person who’s been arrested in relation to the case has been a man named Montez Charles-Xavier Woods. According to authorities, Woods met up with Worthen in Chidester, Ark., just two days after police discovered the bodies of Alyssa and Braydon.

Woods was charged with hindering apprehension or prosecution.

Worthen is described as 6-foot-2 and 160 pounds with brown hair and hazel/brown eyes. He has multiple tattoos on the underside of both forearms, one saying “Matthew 7-6” on his right forearm. Other tattoos are on his right hand; on his chest, including one of a skull with wings; and barbed wire on his left bicep.

Worthen is described by associates as a “neat freak” and likes playing video games and drinking beer. He also smokes cigarettes, primarily Marlboros and Newports.

In October of 2019, he was thought to be in Washington state or Alaska and was allegedly seen in Sylvester, Georgia in December of 2019.

The U.S. Marshals are offering a reward of up to $25,000 for information leading directly to his arrest. Anyone with information should notify the agency at the nearest U.S. Marshals office or the Communications Center at 1-877-WANTED-2. 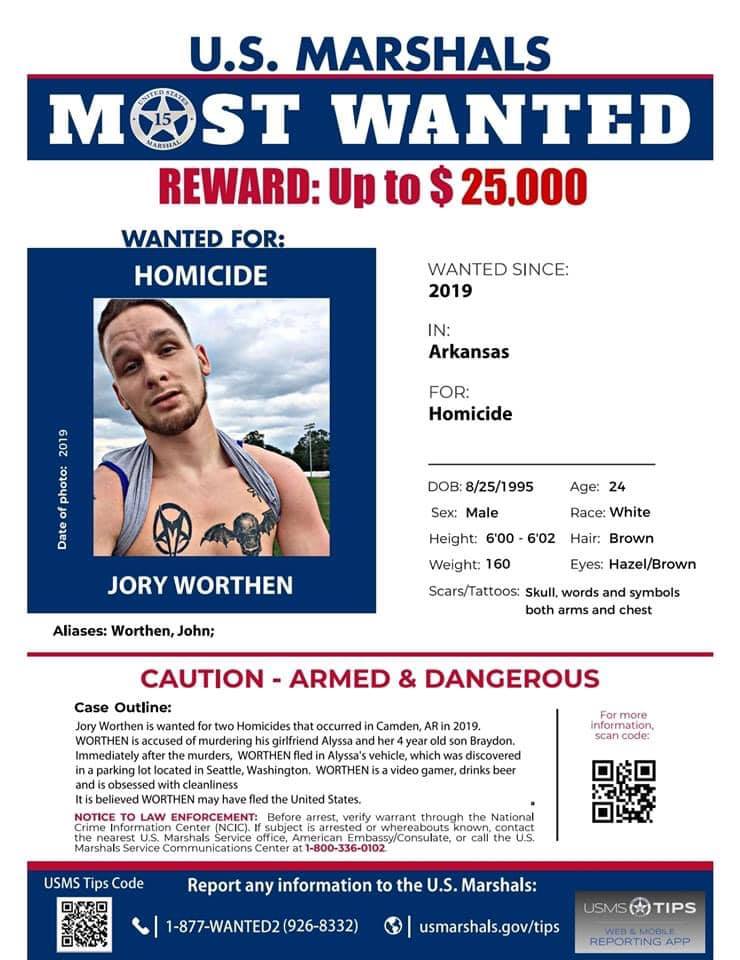