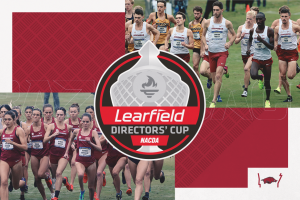 FAYETTEVILLE, Ark. – Arkansas debuted among the nation’s top 20 intercollegiate athletics programs in the initial 2018-19 Learfield Sports Directors’ Cup Standings released on Thursday by the National Association of Collegiate Directors of America (NACDA). The Directors’ Cup tracks the nation’s most successful intercollegiate athletics programs for their performances throughout the year.

Arkansas, ranked No. 18, leads all Southeastern Conference programs and is one of only two league programs (Ole Miss) in the top 35 of the initial standings. The standings released on Thursday included women’s field hockey, men’s cross country and women’s cross country. The Razorbacks currently have 110.5 points.

The 2019 cross country season was full of championships for the University of Arkansas. The women’s team won its sixth-straight SEC cross country crown while junior Gilbert Boit won the SEC individual men’s title. After both the Arkansas men’s and women’s teams won the NCAA South Central Regional crowns in College Station, Texas, both squads advanced to the NCAA Cross Country Championships in Madison, Wisconsin.

In 2017-18, Arkansas tied a program record with a No. 16 finish in the Directors’ Cup. The Razorbacks finished in the top 25 for the ninth time in the past 11 years and in the top 20 for only the seventh time since the Directors’ Cup program began 25 years ago. Arkansas ranked first in the nation among programs with 19 or fewer sports.

The Directors’ Cup program has been tracking the success of the nation’s top intercollegiate athletics programs since 1993-94.