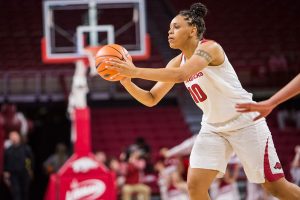 FAYETTEVILLE, Ark. – University of Arkansas senior Malica Monk hit her 1,000th-career point and helped the Razorback women’s basketball team to an 84-80 win over Nebraska in Bud Walton Arena on Tuesday.

Nebraska (5-6) came out of the gates on fire taking a 13-2 lead and forcing the Razorbacks (9-3) to play catch up. Arkansas put together an 8-0 run forcing three Husker turnovers and holding them scoreless for more than three minutes as they closed the gap.

Down five after the first quarter, Arkansas had a 6-0 run that changed the game. Kiara Williams pulled down a rebound and got it out to Jailyn Mason who scored the fast break layup to tie the game at 23-all at the 4:55 mark of the second period.

Nebraska had a 36-31 advantage at the break and stretched the lead to eight points with just over four minutes to play in the third quarter. The Razorbacks answered with a 15-8 run that gave Arkansas a one-point, 57-56, lead with 10 minutes to play.

Chelsea Dungee took over the fourth quarter scoring 12 of her game-high 23 points in the stanza. She helped the home team to a nine-point advantage with 4:32 to go in the game. But Nebraska rallied. The Huskers chipped away tying the game at 79-all with 1:22 to play.They took a brief lead after free throws but Dungee answered with a layup on the other end.

Nebraska missed a 3-point attempt and Arkansas was fouled on the rebound. Made free throws in the final minute secured the win for Arkansas.

The Road To 1,000
Malica Monk hit a 12-foot jumper at the 3:32 mark of the second quarter for her eighth point of the game and the 1,000th point of her career. She is the 28th player in program history to reach the milestone. Monk, Arkansas’ leading scorer from a year ago, finished the game with 16 points and 1,008 for her career.

Notes
•Arkansas starters: Alexis Tolefree, Malica Monk, Kiara Williams, Jailyn Mason, Chelsea Dungee
•Malica Monk hit her 1,000th-career point in the second quarter becoming the 28th Razorback women’s basketball player to reach the milestone.
•Arkansas outscored Nebraska 26-20 in the third quarter. It is just the sixth time this season the Razorbacks have won that period.
•Chelsea Dungee has scored in double figures in 10 games and had 20+ points in eight games. Alexis Tolefree has been in double digits in eight games this season. Malica Monk has had nine games in double figures. It is the sixth game in double figures for Jailyn Mason.
•Arkansas had 13 3-point field goals. It is the fourth game this season that the Razorbacks had double-digit makes from distance.

Up Next
Arkansas travels to Tulsa for the final game before the holiday break. The Razorbacks and Golden Hurricane tip at 2 p.m.