Arkansas Brings Title No. 45 to the Track Capital of the World!

Arkansas Brings Title No. 45 to the Track Capital of the World! 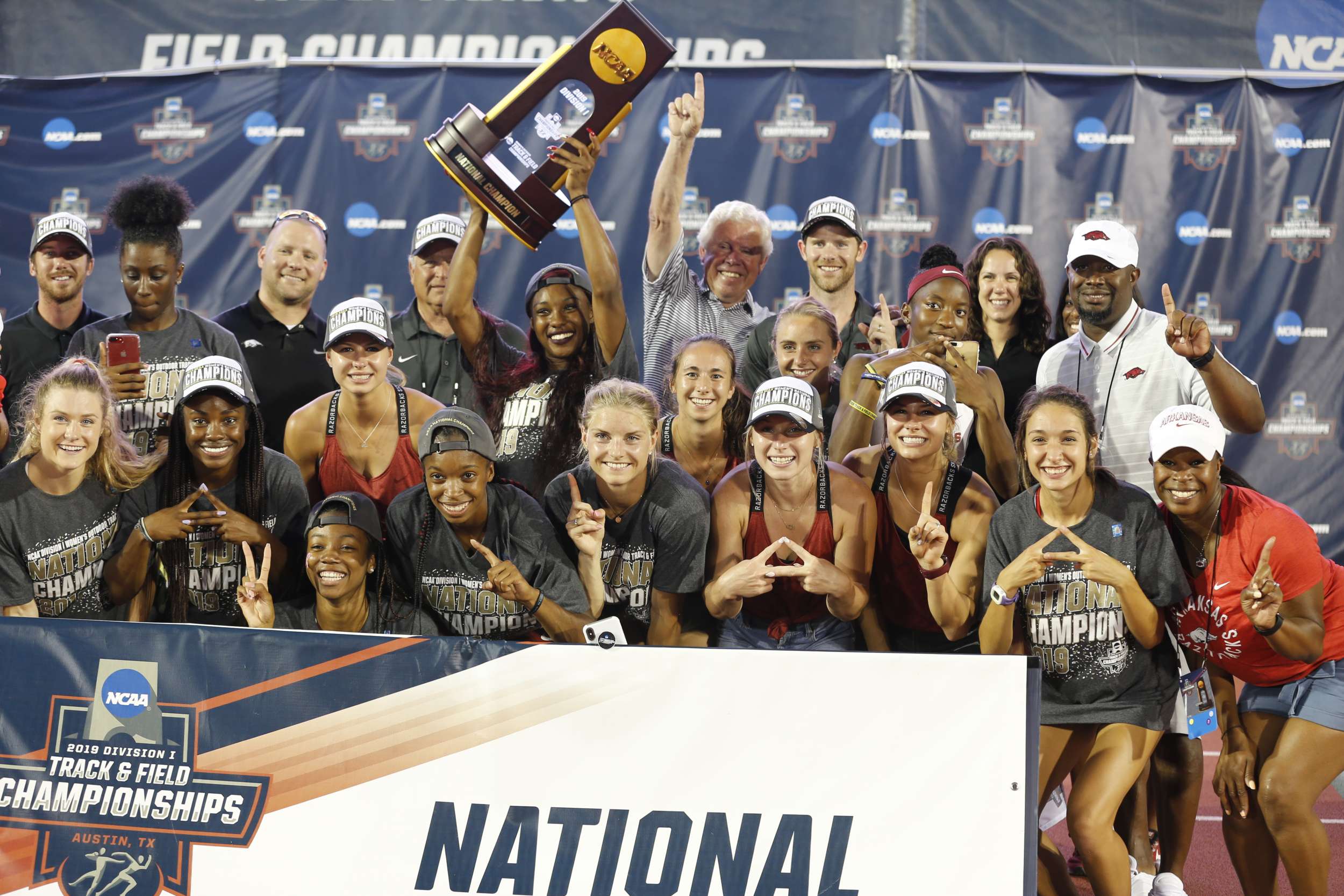 AUSTIN, Texas – Head Coach Lance Harter’s crew battled, scrapped and fought for every point Saturday night at Mike A. Myers Stadium to earn the right to bring home the fourth team title in program history, the second this year, making it the 45th NCAA title between the men’s and women’s track & field programs in the Track Capital of the World!

The crowd was electric heading into the final event of the night as Arkansas and Southern Cal stood tied at 56-points apiece and with both programs holding an entry in the 4×400-meter relay. Arkansas prevailed winning title No. 45 for Arkansas track & field scoring 64 points to USC’s 57 to wrap up the 2019 NCAA Outdoor Season in Austin, Texas.

The day for Arkansas’ started with the 4×100-meter relay of Tamara Kuykendall, Payton Chadwick, Janeek Brown, and Kiara Parker who got the night off to a quick start as they recorded the second-fastest time in program history of 42.79 that trails only the school record run they pieced together in the prelims of 42.65 in the semifinals.

Devin Clark turned in an All-American performance in the 3,000-meter steeplechase, finishing seventh in the final running 9:55.22. Clark ran with the front pack for most of the race before falling off the pace over the final 800-meters where she settled in for her All-American finish.

Janeek Brown captured the first NCAA title of her young career running the second-fastest time in NCAA 100-meter hurdles history at 12.40, missing the collegiate record by one one-hundredth of a second (0.01). The time by Brown is currently the No. 1 time in the world for the sophomore from Kingston, Jamacia. Her time also set the Jamaican national record, breaking a 16-year-old mark formally held by Brigitte Foster-Hylton from back in 2003. Senior Payton Chadwick competed alongside Brown taking eighth-place in 13.05 seconds.

Kiara Parker came through in the 100-meter final in a HUGE way, breaking the program record in the 100-meters by shaving off two one-hundredths of a second from Jada Baylark’s 2018 record, running 11.02 seconds for fifth-place. LSU’s Sha’Carri Richardson took the event in a collegiate record time of 10.75.

Kethlin Campbell grabbed a fourth-place finish in the 400-meters with a brisk run of 51.09 seconds. The sophomore transfer from Duke capped her first season in Fayetteville having earned First-Team honors at both the NCAA Indoor Championships and the Outdoor NCAA Championships while moving herself to No. 4 all-time at Arkansas in the 400-meters with a lifetime-best of 51.03 and running key legs on both the indoor and outdoor mile relays.

History was made in the final of the 200-meters as Janeek Brown finally moved past Jackie Joyner-Kersee. Brown who ran an NCAA all-time No. 2 mark of 12.40 in to win the 100-meter hurdle title earlier in the day, sprinted to a time of 22.40 in the 200-meters finishing fourth while posting the fastest 100mH/200m one-day combo in WORLD HISTORY. Brown’s time also broke the program record held by multi-time Olympian Veronica Campbell-Brown of 22.41 by one one-hundredth of a second.

Taylor Werner ran a race of a lifetime in the 5,000-meter final running with the lead over the final lap before fading to an NCAA Runner-up finish in a time of 15:51.24. Werner left everything she had on the track as she moved to the lead with 500-meters to go and carried the lead until about 50-meters as Colorado’s Dani Jones – the NCAA Cross Country Champion –  ran by besting Werner by a little over a second.

Heading into the final event Arkansas and USC were tied with 56-points apiece, and each team with an entry to the 4×100-meter relay.

With Springdale native Payton Chadwick on the carry for the Razorbacks, a smart move by the senior on the third leg kept Arkansas out of a potential disaster as Alabama and USC ran into each other with the Trojans putting the baton on the track. Chadwick swung wide keeping the Razorbacks in contention for the event title as well as securing the team championships. Chadwick handed off to the 400-meter All-American Campbell who split a 49.79 – the fastest leg of any relay in the final – to surge Arkansas from fourth-place to runner-up as the quartet ran the second-fastest time in program history stopping the clock at 3:25.89 a mere three-tenths (.30) of a second behind the National Champion relay team from Texas A&M.