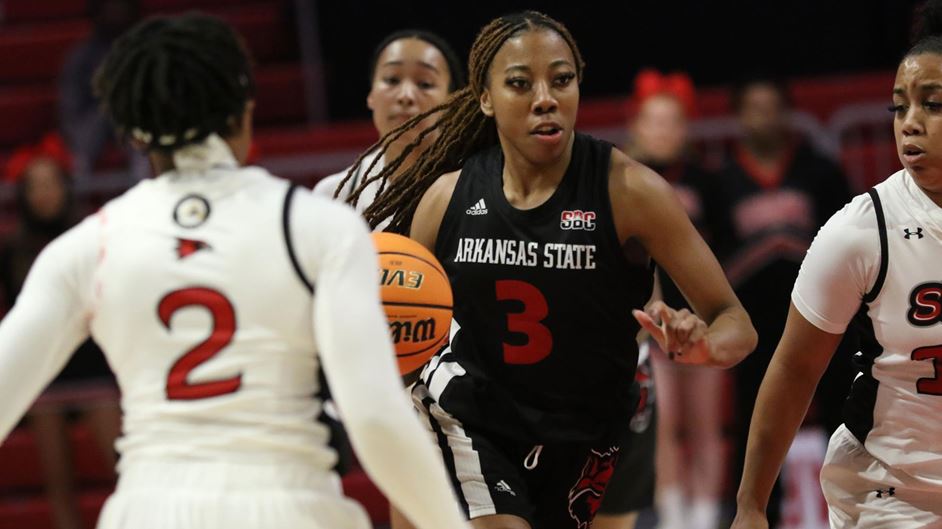 MOBILE, Ala. (1/20/22) – Morgan Wallace and Trinitee Jackson registered double-doubles, but it was not enough to lift the Arkansas State women’s basketball team past South Alabama Thursday night at the Mitchell Center, falling 73-65.

Jireh Washington led all players with a career-tying 25 points on 8-of-19 shooting and 9-of-11 from the free-throw line, moving to within four points of joining Wallace with 1,000 career points. Trinitee Jackson registered her sixth double-double of the year, notching 10 points with 14 boards.

A-State out-rebounded the Jaguars (8-8, 2-1) 50-39, and battled back from a double-digit deficit to cut it to two scores late, but key free throws down the stretch moved USA past the Scarlet and Black.

A-State took an early 10-4 lead after Jackson ended an 8-0 run with a layup before the Jaguars pulled back ahead by three with a 9-0 run, with Vaught responsible for five of those points. USA led 19-16 after the first quarter.

In the second, the Red Wolves could not seem to find a field goal, going just 2 of 19 from the floor to end the half but still keeping it close. USA took a double-digit lead with 3 minutes left in the half on a pair of free throws by Jaylin Powell and led 36-28 at the half.

The Red Wolves regrouped after the break and came out on a 12-7 run to trim the margin to just two before a pair of treys helped push the Jaguars’ lead back out to 10. South Alabama took a 56-47 lead into the fourth quarter.

USA’s largest lead of the night came early in the fourth on a jumper by Kiana Anderson to make it 60-47. A-State picked up the pressure, which turned into points as the Red Wolves managed to cut the deficit back down to six with a minute to go. South Alabama took advantage of its foul shots, ultimately taking the eight-point victory and halting A-State’s three-game winning streak.

A-State looks to return to its winning ways Saturday, closing out its Alabama road swing with a tough test at reigning conference champion Troy. Tip-off versus the Trojans (13-7, 4-2 SBC) at Trojan Arena is slated for 4 p.m. and the game can be viewed on ESPN+. The radio broadcast can be heard on the EAB Red Wolves Sports Network flagship station 95.3/96.9 The Ticket/970 AM.