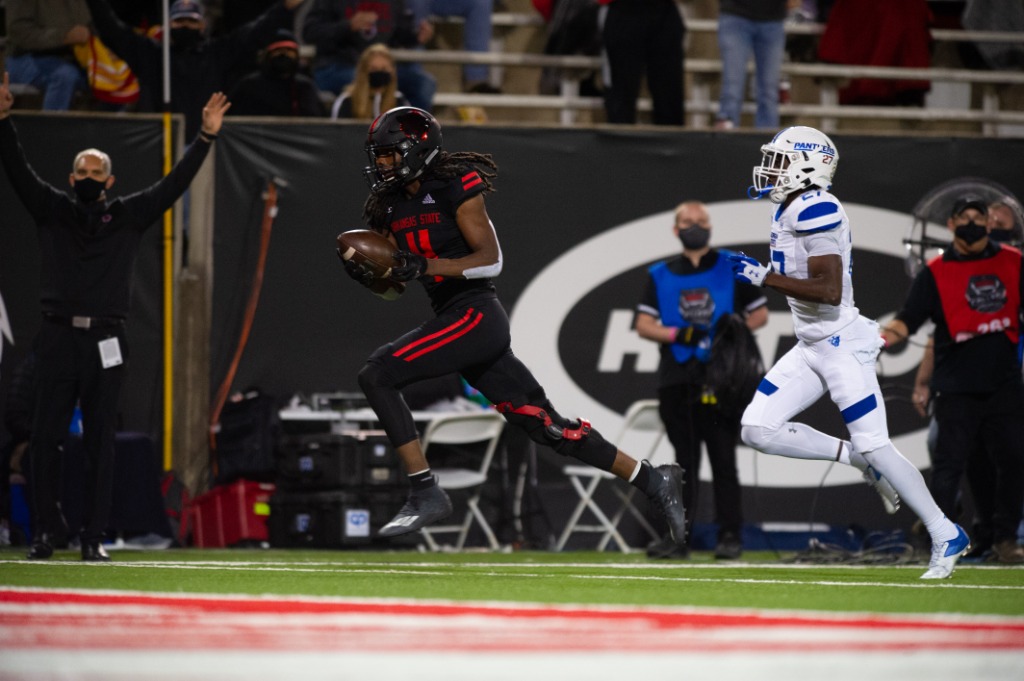 Records were made to be broken.

The Red Wolves (3-2, 1-1 Sun Belt Conference) and Panthers (1-2, 0-2) battled back-and-forth offensively all night, combining for 1,192 yards – 865 through the air – and 59 first downs. The two teams also combined for 14 touchdowns and 172 total plays (Arkansas State 96, Georgia State 76). The teams traded scores for seemingly the entire night, accounting for seven ties and 10 lead changes, as neither team held more than a touchdown lead in the contest.

“That was a wild one,” said head coach Blake Anderson, who earned his 50th career victory Thursday night. “I’ve been in a few of those as a coordinator but not much as a head coach. We couldn’t afford to go down 0-2 in league play, we had to find a way to get this one. Offense did a great job, defense really struggled but found a way to get a stop when they needed to. It was a team win.”

A-State’s quarterback tandem of Logan Bonner (18-28, 197 yards, 3 TD) and Layne Hatcher (21 of 28, 332 yards, 4 TD) had a tremendous night passing, completing 39 of 56 passes for 529 yards and seven touchdowns to no interceptions. Roshauud Paul also completed a 22-yard pass for a score. With the eight total touchdown passes, A-State tied the Sun Belt Conference record for touchdown passes in a single game. Over the last two games, Arkansas State has passed for 14 touchdowns to no interceptions.

In total, the Red Wolves amassed 609 yards (551 passing, 58 rushing) while going 3 of 4 on fourth-down attempts. A-State recorded 34 first downs, which tied the school record. In the red zone, the Scarlet and Black was nearly perfect, converting four of its five opportunities inside Georgia State’s 20.

Georgia State totaled 583 yards of offense (314 passing, 269 rushing) on the night. Cornelius Brown IV threw for 314 yards on 18 of 35 passing and three scores for Georgia State, with all three scoring passes going to Sam Pinckney, who hauled in six catches for 146 yards. Tucker Gregg led a GSU ground game that pounded out 269 yards on 41 carries and three scores, churning out 142 yards on just 14 carries. Brown also contributed with 83 yards and two scores on 13 carries.

A-State’s defense came out strong, forcing a three-and-out, where a bad snap to the punter was recovered at the Georgia State 5. Three plays later, Bonner found Tyler in the back of the end zone for a three-yard scoring pass to make it 7-0 at the 12:58 mark in the first.

Georgia State responded with 4:34 left in the first, turning to the ground game to tie things up at 7. A punt by Hanson was downed at the 1, but Brown led the Panthers on a five-play, 99-yard drive that began with a 56-yard run into A-State territory by Gregg. Four plays later, on fourth-and-2, Brown scampered 35 yards into the end zone, diving over the pylon. A-State then reclaimed the lead with 3:20 remaining in the first when Hatcher found Green for a 49-yard touchdown pass to make it 14-7.

The Panthers tied it with 12:11 left in the half when Bonner fumbled on a sack at the GSU 28 and GSU’s Blake Carroll scooped up the loose ball, taking it 74 yards for the score. A-State reclaimed a 21-14 lead with six minutes remaining when, on fourth-and-2 from the GSU 42, Bonner sent a deep pass to Adams, who leapt over his defender and hauled in the touchdown pass.

Brown then found the end zone again on the ground, this time from 11 yards out to tie it up at 21 with 4:29 to go in the half. To begin that four-play scoring drive, Brown found Jamari Thrash for a 57-yard pass inside the A-State 20. Hatcher then led the Red Wolves on an 11-play scoring drive that was capped off by a diving catch in the end zone by Green to make it 28-21 with 48 seconds left. Georgia State tied it up once again at 28 with 14 seconds left in the half when Brown connected with Pinckney on a 21-yard pass. At halftime, the game was tied at 28.

To open the second half, the Panthers took advantage of a turnover on downs to lead 35-28 when Brown found Pinckney again, this time on a 36-yard strike. The Red Wolves tied it up at 35 on the next drive when Bonner connected with Bowling for a 16-yard score with 8:21 to go in the third. A-State then reclaimed the lead at 42-35 when Hatcher found Pare on an eight-yard pass with 6:21 left in the quarter to cap off a three-play, 53-yard drive that included a 45-yard pass to Green that set up the touchdown on the next play.

Georgia State tied it up again at 42 when Tucker Gregg scored on a seven-yard rush with 4:44 left in the third. A-State claimed the lead once again with 2:36 left when Blake Grupe drilled a 39-yard field goal. GSU then took a 49-45 lead at the start of the fourth on a 31-yard pass from Brown to Pinckney. The lead then changed hands again when Hatcher found Adams for a 32-yard score with 12:40 to go to make it 52-49 A-State.

The Panthers tied it up at 52 with 6:55 remaining on a 29-yard field goal by Noel Ruiz. On the ensuing drive, A-State took a 59-52 lead when Paul found Pare on a reverse pass for 29 yards with 4:23 to go. The score marked a school-record eighth touchdown pass of the night for the Red Wolves that also tied the Sun Belt Conference record for touchdown passes in a game.

With 2:04 left in the game, A-State’s defense picked up the key stop it needed, halting the Panthers on fourth down to regain possession and wind out the clock.