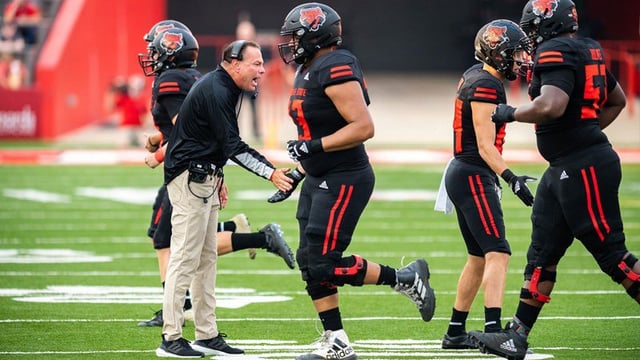 JONESBORO, Ark. (9/4/21) – It was a tale of two halves in the inaugural game of the Butch Jones era, the Arkansas State football team overcame a halftime deficit to rout Central Arkansas 40-21 Saturday night at Centennial Bank Stadium.

Layne Hatcher led that second-half charge, completing all 12 of his passes on the night for 150 yards and four touchdowns. A-State (1-0) outscored UCA (0-1) 34-14 in the last 30 minutes of play to win its season opener for the first time since 2018. The win also made Jones the third consecutive A-State head coach to win his first game at the helm.

“I liked the way they responded, but didn’t like the way we started,” Jones said. “I think we experienced everything negative that you could experience in a first half. We talked about the DNA of our football team and the ability to persevere. We definitely didn’t play winning football and have a lot to learn from, but we came out in the second half and finally played complementary football. I said I’d learn a lot about this team tonight, and we have a lot of things to work on to get better. We know, with the schedule coming up, that we have to get better in a hurry.”

Hatcher’s performance made him the seventh FBS quarterback since 2000 to go 100 percent passing in 12 or more attempts in a game. He is also one of three in that group of QBs with four or more touchdown passes among those 12 passes.

A-State racked up 513 yards of total offense, including 319 passing, with starter James Blackman going 16-for-26 and 169 yards. Corey Rucker was a top target, grabbing nine passes for 138 yards and three scores while newcomer Te’Vailance Hunt caught six passes for 55 yards and a touchdown. The Red Wolves found success on the ground as well, churning out 194 yards led by Alan Lamar’s 67 yards.

“Layne came in and really sparked us,” Jones added. “Then we got Corey Rucker involved and he made some big plays for us. I thought Jeff Foreman stepped up and made some big plays and (Hunt) did as well. We were able to wear them down running the ball. We talk about winning the fourth quarter and making conditioning a factor, and those are some things we can build upon.”

UCA struck first on a 66-yard pass from Breylin Smith to Chris Richmond before A-State responded with a pair of field goals off the leg of Blake Grupe to make it 7-6 at the half.

A-State took advantage of prime field position after a 29-yard punt return by Johnnie Lang Jr. to move ahead 13-7 midway through the third on a 2-yard plunge by Lamar. That lead expanded to 20-7 later in the quarter when Hatcher linked up with Rucker for a 34-yard strike that capped off an eight-play, 91-yard drive.

The Bears responded on the ensuing drive when Smith found Lujuan Winningham for a 7-yard scoring strike with 31 seconds left in the quarter to cut A-State’s lead to 20-14 after three quarters.

Two more Hatcher-to-Rucker scores bookended a Samy Johnson interception and handed the Red Wolves a 33-14 lead with over 11 minutes left in the contest. UCA then closed out its night with Smith and Winningham reconnecting for a 14-yard score to make it 33-21 with 7:33 to go. A-State closed out the scoring when Hatcher found Hunt from 5 yards out with 2:48 to go, sealing the victory.

NEXT UP
A-State returns to action Saturday, Sept. 11, hosting Memphis, with kickoff set for 6 p.m. CT on ESPN+. Every Red Wolves football game can be heard live on 107.9 FM in the Northeast Arkansas area.