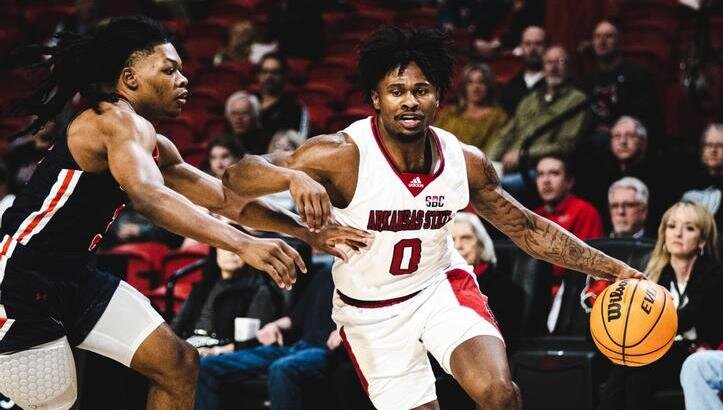 Four Arkansas State players scored in double figures, including Omar El-Sheikh with his first double-double this season, to help the Red Wolves overcome an eight-point deficit with 7:29 remaining and claim a 70-64 victory against UT Martin Tuesday evening at First National Bank Arena.

Arkansas State (3-2) shot 46 percent in comparison to UT Martin’s .386 mark and outrebounded the Skyhawks 40-29, improving to 3-0 this year on its home court.  Junior guard Caleb Field led all scorers with 17 points while dishing out seven of A-State’s 15 assists on the night.

A back-and-forth game for much of the night, the contest featured nine ties and 10 lead changes with neither team ever holding a double-digit advantage.  However, with the score tied 48-48, UT Martin (3-4) put together a 9-1 run to grab its largest lead of the night at 57-49 with 7:29 left in the contest.

Capped by an Avery Felts three pointer, the Red Wolves responded with an 11-3 run to tie the game 60-60 at the 3:18 mark.  Felts finished the outing with seven points to go along with eight rebounds and four steals, which were both career-best totals for the sophomore guard.

The Skyhawks were able to push their advantage back to 64-62 with just 1:25 left on the clock before the Red Wolves closed the game out strong by scoring the last eight points.  A Fields’ free throw pulled A-State back to within one, and then Farrington gave the Red Wolves the lead for good with his fourth trey of the night with 40 seconds remaining.

UT Martin missed a three-point shot on its next position and Fields found Farrington open for a layup on the other end of the court before Felts set the final score with a pair of late free throws.

Farrington scored eight of his 14 points in the second half, while also finishing the night with a season-high five rebounds and career-best four assists.

Remaining at home for its next three games, Arkansas State returns to action Friday, Nov. 25, with 7:00 p.m. game against Prairie View A&M.  The contest will appear on ESPN+