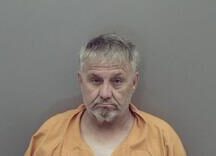 A $75,000 bond was set Friday for a Pine Bluff man arrested Wednesday with a motorcycle that had been reported stolen.

Jefferson County District Judge Kim Bridgforth set the bond after ruling prosecutors have probable cause to charge Mark Glover, 56, with theft by receiving.

Deputy Prosecutor Caleb Conrad said an officer was sent to 3904 Highway 65-B in response to a reported stolen vehicle. When the officer arrived, Glover told him that “Robert let him use the motorcycle.”

Conrad then told the court what happened next.

Conrad said Glover has an extensive criminal history including theft by receiving and drug-related charges.

Glover said he would hire his own attorney.