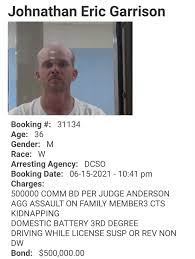 According to the Drew County Sheriff’s Office, a judge has set a $500,000 bond for a Desha County man who allegedly beat his wife, put her and two children in a drainage ditch, and threatened to kill them.

Johnathan Garrison, 36, of Desha County was traveling west on U.S. 278 East in Drew County when a Drew County deputy stopped him for an inoperable taillight. After the stop, the deputy noticed a female passenger with a bruised and swollen face, according to a news release from the Drew County Sheriff’s Office.

They added that the woman reportedly told the deputy that Garrison, her husband, had hit her several times. She said he had driven down a farm road, stopped the vehicle, threw her into a drainage ditch, pushed her head underwater several times, and threatened to kill her and her two children, aged 5 and 7. She said Garrison also put the two children in the drainage ditch but she jumped in and helped them out of the water.

Garrison is being held in the Drew County Detention Center. The release explained that he likely will be charged with three counts of kidnapping, three counts of aggravated assault on a family member, and two counts of third-degree domestic battery.