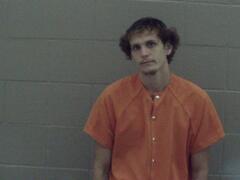 A Pine Bluff man was arrested Tuesday after he allegedly took his mother’s vehicle without permission.

Jerry Golden, 21, was taken into custody after a Jefferson County Sheriff’s deputy found him waking in the middle of the highway.

During a court hearing Thursday, Deputy Prosecutor Lisa McGriff said police were sent to the 300 block of North Birch in response to a report of a stolen auto.

When Detective Sgt. Michael Roberts interviewed Golden, he said he did not steal the car but went joyriding in it and could not be charged with theft of property.

McGriff said when he was booked in at the adult detention center, jailers found a syringe with a clear liquid in it that tested positive for methamphetamine in his shoe.

Golden is currently on probation stemming from a 2019 conviction for breaking or entering and because of that, Jefferson County District Judge Kim Bridgforth set a $5,000 cash only bond after ruling prosecutors have probable cause to charge him with theft of property and possession of a controlled substance.