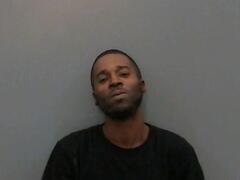 A $5,000 bond was set Friday for a Jefferson County man accused of firing multiple shots in the air after an altercation in White Hall Oct, 11.

Reading from an affidavit from White Hall Police Investigator Clayton Cantrell, Deputy Prosecutor Carol Billings said officers were sent to a reported domestic disturbance at an apartment on White Hall Ave., at 1:15 a.m. where they encountered Davis and a female who were both reportedly intoxicated.

Officers were sent back at 2:15 a.m. after a report of shots fired. The female said she and her brother were in the apartment when Davis and the brother got into an altercation. She said Davis walked outside with a rifle and fired multiple shots. Police located shell casings at the scene.

Cantrell reported that officers then received a call that a person with a weapon was knocking on doors in the area and located Davis, who spontaneously told them he had thrown the rifle under a vehicle. A nine-millimeter rifle was located and collected as evidence.

Billings said Davis told police he and the woman’s brother got into an argument and he thought the brother was going to shoot him, so he walked outside and fired shots in the air above the brother’s car. The brother’s girlfriend and three children were in the car at the time and the brother told police he fired multiple shots at Davis in self-defense and Davis ran from the scene.

Judge Kearney ordered Davis, who was represented in the court hearing by attorney Garfield Bloodman, to have no contact with any of the alleged victims until the case is settled.

JCSO and PBPD both report uptick in stolen vehicle reports

Woman accused of stabbing another woman during altercation