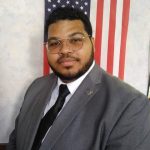 Ricky Dale Harrington Jr. from Pine Bluff will be seeking the Libertarian Party of Arkansas’s nomination for US Senate, running against Republican incumbent Tom Cotton.

Harrington lives in Pine Bluff with his wife and 3 children. His two older children are on the autism spectrum and he said he understands the difficulties of families with special needs children.

He is a missionary by profession having most recently served in Communist China and said in the release,

“I spent two years entrenched in Communism while living abroad in China. Every day I witnessed first-hand the devastating effects of lack of rights and freedoms that we hold so dear here in America. I was inspired to join the fight in saving our Republic. I have watched as many of you have, the unconstitutional laws being passed, the BIG government bureaucrats seeking to insulate their power at the expense of our personal freedoms. I say NO MORE! We have been divided like sheep and encouraged by our media to view our fellow Americans as our enemy. Like you, I see the importance of working together to preserve our Union, and the rights of all citizens.”

“I am seeking the Libertarian nomination for US senate, SO WE CAN TAKE OUR REPUBLIC BACK!,” Harrington said in the press release. “It is going to take all of you to send a message to the career politicians that we will no longer tolerate their corruption, pork belly spending, and disregard for our Nation’s Constitution. Help me work for you, WE THE PEOPLE, by supporting me to be your Senator in Washington D.C.”

According to the press release, Harrington will be releasing some of the issues he would like to address during the campaign, but the two that are most dear to him are criminal justice reform and healthcare reform.

“I am seeking the Libertarian nomination for US Senate in Arkansas,” Harrington said on his Facebook page. “It is time for a change in the way business is done in Washington D.C. The two party system has failed. I am sure you see what I see! The two parties war with one another for control while the Constitutional rights of the citizens are trampled. You have the power!”