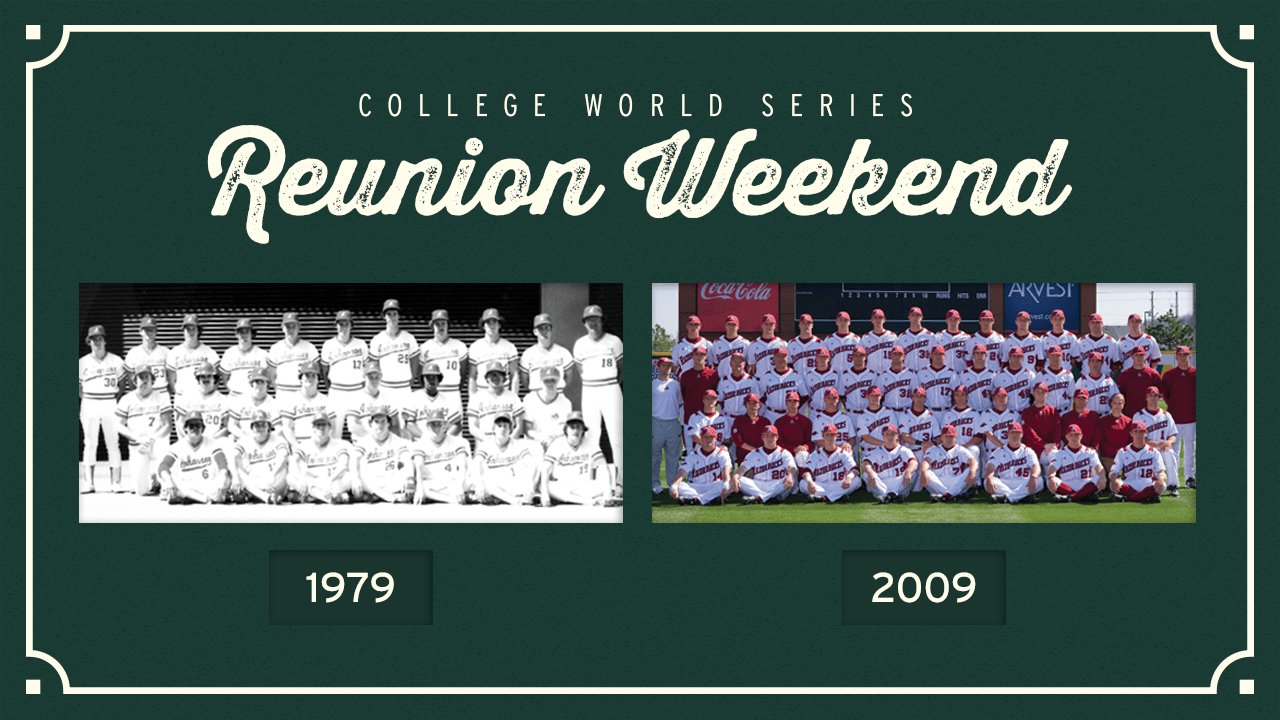 FAYETTEVILLE, Ark. – Arkansas Baseball will host a reunion for two of its most memorable College World Series teams this weekend when Arkansas takes on Tennessee at Baum-Walker Stadium.

Members of the 1979 and 2009 teams will return to Fayetteville to celebrate the 40th and 10th anniversaries, respectively, of the Hogs’ first and sixth trips to college baseball’s biggest stage. More than 40 coaches and players from the two teams are scheduled to be at Baum-Walker Stadium this weekend and fans will be able to help celebrate with special giveaways all weekend long.

Both teams will be honored on the field prior to Saturday’s game between the Razorbacks and Volunteers and a special shirsey and poster will be given away on Friday and Saturday to commemorate the nine College World Series teams in Arkansas history.

The 1979 team was former head coach Norm DeBriyn’s 10th team since taking over the Arkansas baseball program in 1970. That team was led by All-SWC selections Steve Krueger, Johnny Ray and Ed Wallace, as well as All-American catcher Ronn Reynolds and won 49 games, which is still the third-most school history.

Arkansas not only finished second in the Southwest Conference with a 19-5 record that year, but also made a spectacular run through the NCAA Regionals to reach its first College World Series, finishing as the National Runner-Up to Cal State Fullerton, an accomplishment that still stands tied for the best national finish in school history.

The 1979 College World Series appearance was a culmination of hard work and dedication by DeBriyn to not only revive the Arkansas Baseball program, but to make it one of the most competitive teams in the SWC and the nation. A task he was able to achieve in his 32 years as Razorback head coach.

Thirty years after that first appearance and four College World Series later, Arkansas returned to Omaha for the sixth time and second under a DeBriyn protégé in Dave Van Horn in 2009. Much like the 1979 team, the 2009 team used a postseason push to reach the College World Series semifinals.

The 2009 Hogs finished the year with 41 wins and fourth in the SEC Western Division, but was able to reach the postseason and win three-straight games in the Norman Regional, knocking off national seed Oklahoma. They followed that with two-straight wins on the road against No. 5 Florida State in the Tallahassee Super Regional to cap an improbable sixth run to Omaha.

On college baseball’s grandest stage at historic Rosenblatt Stadium, Arkansas split its first two games, beating Cal State Fullerton and then losing to LSU. The Razorbacks found themselves one out away from elimination against Virginia before Brett Eibner lifted a two-run home run to left field to tie the game. Arkansas went on to win an instant classic, 4-3, in 12 innings, and finish the series in third place.

During the regular-season, Arkansas earned its first No. 1 ranking in school history and defeated Arizona State in front of a then-Baum record 11,014 fans in the facility’s first matchup between top-ranked teams; the Sun Devils were also ranked No. 1 at the time in other national polls.

Game times for this weekend’s series with Tennessee are set for 6:30 p.m. on Friday and Saturday, followed by a 4 p.m. start on Sunday. Gates will open 90 minutes prior to first pitch each day and the 1979 and 2009 teams will be honored prior to Saturday’s game roughly 30 minutes before first pitch.