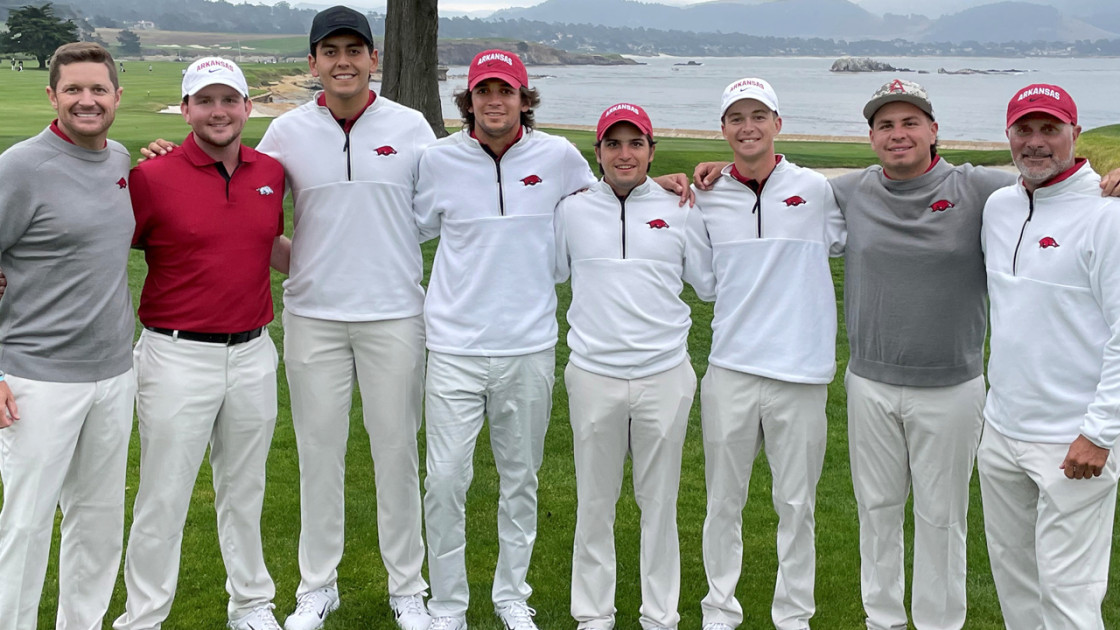 PEBBLE BEACH, Calif. – Julian Perico and Segundo Oliva Pinto each fired a final-round 67, while Luke Long carded a 68, as #19 Arkansas shot a 17-under-par 343 Sunday – both the lowest round of the day (by four strokes) and the lowest round of the tournament (by seven strokes) – to finish third with a 13-under-par total of 1,067 at the Carmel Cup, played at historic Pebble Beach Golf Links (par 72, 6,828 yards).

While Perico, Oliva Pinto and Long headlined the final day’s performances, it was Mateo Fernandez de Oliveira and Wil Gibson, each of whom held the lead at one point during over the three days, that led Arkansas with a pair of top 10 finishes.

In fact, all six Razorbacks finished among the top 30 as Perico and Oliva Pinto tied for 17th while Long and Juan Camilo Vesga tied for 27th.

“This was a great way to open the season,” head coach Brad McMakin said. “It was a great team effort from all six players. I was really proud of each and every one of them this week.”

Fernandez de Oliveira tied for third with a 5-under-par score of 211 (70-68-73). It marked his fourth top 10 finish of his collegiate career and his first-ever, top-five finish. Also, both his score of 211 and finishing 5-under marked his second-best, 54-hole results.

Gibson finished tied for 10th to earn his second career top 10 finish – his first not playing as an individual. The Jonesboro native turned in rounds of 68-75-70 for a 3-under-par 213. It was his best career finish in relation to par as a Razorback. In round one, Gibson birdied six of his last eight holes. After a 3-over 75 in round two, he opened the final round with four birdies over six holes to set the tone for his top 10 finish.

Long had five birdies and a bogey to improve 11 places to tie for 27th on the leaderboard by shooting a 4-under 68 in the final round. Vesga, playing in his collegiate debut this week, also tied for 27th thanks to three birdies and two bogeys for a final-round 71.

Up next, the Arkansas men’s and women’s programs will host the second annual Blessings Collegiate Invitational presented by Tyson Foods from Oct. 4-6.