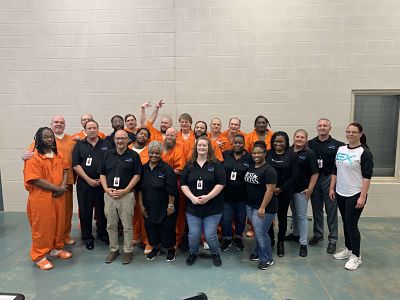 The Jefferson County Sheriff’s office collaborated with a faith-based nonprofit organization called Exodus.Life to help detainees become clean of addiction and prepare to start new lives, according to members of the organization. Members of the Jefferson County Sheriff’s office, Exodus.Life, and others gathered to celebrate the graduation of 12 detainees that took place at the W.C. Dub Brassell Adult Detention Center on Thursday, July 8. Paul Stevens, who is the first executive director of the organization, spoke with Deltaplex News and explained the purpose of the event.

The organization has been around since 2007. It collaborated with Arkansas Community Corrections until they transitioned to Jefferson County jails. Traditionally the program is 12 weeks with a total of 240 hours, but due to COVID restraints, it has been reduced to 6-8 weeks. Stevens further spoke about their growth in graduation rate and the effect the program has on graduating detainees.

Sheriff Lafayette Woods Jr. also spoke about his expectations of this collaboration and the progression that they are making.

The next class takes place in two weeks with separate groups for men and women. Exodus.Life is also opening its own location at 206 West Harding in Pine Bluff to give assistance to individuals within the community.